To celebrate #BlackHistoryMonth, our students will be learning and playing music by some prominent black composers as well as discussing their achievements. We're pleased to highlight those composers on our website and social media, starting with Ignatius Sancho - Author, Entrepreneur, Playwright, and Composer.

"As you are not to be a boy all your life- and I trust would not be reckoned a fool- use your every endeavour to be a good man." 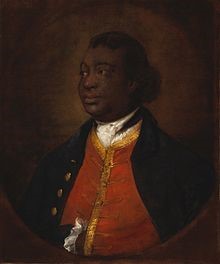 Charles Ignatius Sancho was born on a slave ship off the coast of Africa and died one of the most famous men in England. Sancho grew up as an orphan, and was brought to London at the age of two to work for three sisters as a slave. He learned to read and write, and eventually gained his freedom after working as a butler and valet for more than 20 years.

After gaining his freedom, Sancho married and opened a grocery store with his wife. He wrote famous letters, and worked to abolish slavery. Sancho was also a great musician. He composed songs, minuets, and country dances, as well as a book on music theory and two plays. He became known as “The Extraordinary Negro” for his many accomplishments. Sancho was the first black man to vote in a British election, and the first to have an obituary published in an English newspaper.

Les Contes des Fées (Fairytales) is a simple, two-part tune in 2/4, written for people to learn and play together at home.

Minuet No. 15 is a fun and clever dance tune, in 3/4. The Minuet was the most popular dance of the 18th century. It was originally from France, and was danced by everyone from kings and queens to normal people at home.

Sancho in his own words:

‘the first part of my life was rather unlucky, as I was placed in a family who judged ignorance the best and only security for obedience’

‘Old folks love to seem wise- and if you are silly enough to correspond with grey hairs, take the consequence.’

‘Poverty and Genius were coupled by the wisdom of Providence for wise and good ends, no doubt’

‘I am sorry to observe that the practice of your country (which as a resident I love – and for its freedom – and for the many blessings I enjoy in it – shall ever have my warmest wishes, prayers and blessings); I say it is with reluctance, that I must observe your country's conduct has been uniformly wicked in the East – West-Indies – and even on the coast of Guinea’

‘In Africa, the poor wretched natives blessed with the most fertile and luxuriant soil – are rendered so much the more miserable for what Providence meant as a blessing: the Christians' abominable traffic for slaves and the horrid cruelty and treachery of the petty Kings encouraged by their Christian customers who carry them strong liquors to enflame their national madness – and powder – and bad fire-arms – to furnish them with the hellish means of killing and kidnapping.’