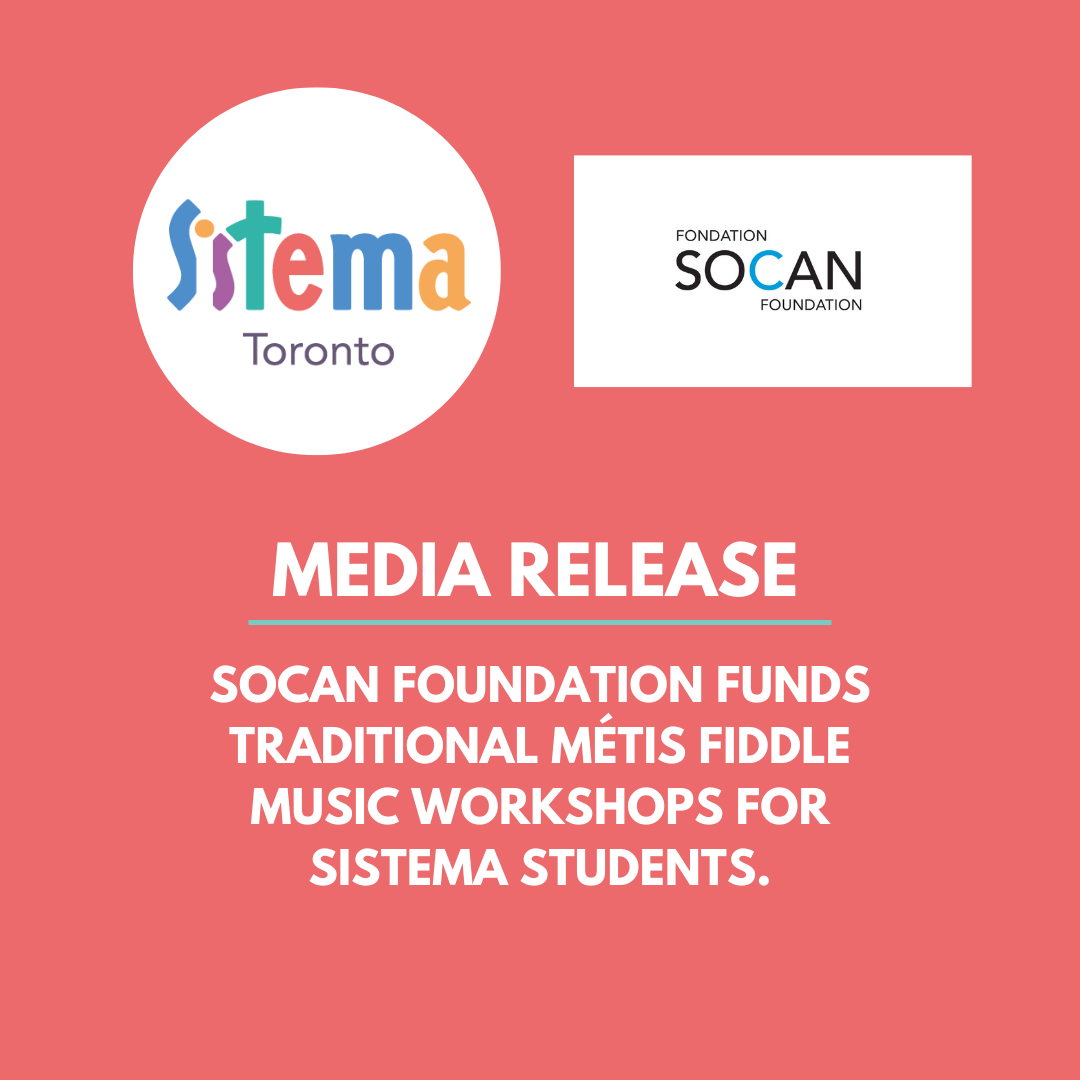 Métis fiddling, the incorporation of First Nations, Scottish, and French-Canadian rhythms and an oral
tradition with important musical ties to First Nations, especially Ojibwe, was introduced to 81 Sistema
Toronto students to expand their understanding of Indigenous music and cultural competency. The
students, who are part of Sistema Toronto, an after-school program, were offered educational
workshops that took place across multiple Sistema Toronto centers, introducing them to traditional
Métis music and culture, led by acclaimed Métis fiddler Alyssa Delbaere-Sawchuk. The SOCAN
foundation provided Sistema Toronto with a grant of $3,500 to support this initiative. With their help, the
students at Sistema Toronto were able to learn about this important musical tradition and the music and
culture of Indigenous performers. These students have been part of the Sistema program for several
years and have worked with numerous well-known artists and educators. Collaborating with Ms.
Delbaere-Sawchuk and gaining important skills in Métis fiddling has been an enriching and inspiring
opportunity for these Sistema students.

Sistema Toronto
Sistema Toronto works with 300+ children and their families from neighbourhoods in Toronto with some
of the city’s highest child poverty rates – Jane-Finch, East Scarborough, Lambton Park, and Parkdale.
Students work together for ten hours per week to learn orchestral instruments (violin, viola, cello,
double bass), percussion, and choir while developing important life skills like confidence, empathy, and
self-advocacy. Participants receive instruction with professional musicians, instruments to learn on,
performance opportunities, and a daily nutritious snack at no cost to participants’ families. Sistema
Toronto students face a variety of challenges. Many are newcomers to Canada, others are on the
autism spectrum, and some have experienced trauma. The program is designed to equip kids living on
the margins with the skills they need to escape generational poverty and succeed in all areas of life. For
more information, visit: www.sistema-toronto.ca.

Métis fiddler, Alyssa Delbaere-Sawchuk
The Canadian composer and songwriter featured in this project is Métis fiddler Alyssa
Delbaere-Sawchuk. Born in Winnipeg, Alyssa Delbaere-Sawchuk has completed a doctorate in
classical and fiddle music traditions on the viola at the Université de Montréal. Upon learning about her
Red River Métis roots, she discovered the old native and Métis style of fiddling traditions. Alyssa’s
mentorship with Ojibwe elder fiddler Lawrence “Teddy Boy” Houle led her to collaborate with his
brother, James Flett, in creating Oméigwessi, Reel Métis: A Tribute to Walter Flett, which won Best
Fiddle and Best Instrumental Album at the 2008 Canadian Aboriginal Music Awards. She is also a
member of the Métis Fiddler Quartet. Their release, North West Voyage, received the Best Traditional
Album award at the 2012 Canadian Folk Music Awards.

Socan Foundation
The SOCAN Foundation is a Canadian initiative that supports musical innovation and works to increase
awareness of the importance of music creators in today’s society. For the purpose of fostering societal
appreciation of Canadian music, the SOCAN Foundation awards grants to Canadian music producers
and publishers. Their grant enables the dissemination of their music both domestically and
internationally, ensuring that their voices are heard both overseas and domestically.